For the past year, I’ve been quietly working on a personal project called dyndnsd. I am planning to write an introduction later, but, right now, I want to talk about a novel aspect (in my opinion) of dyndnsd. Here’s the TL;DR: dyndnsd is a Dynamic DNS daemon. That is, it’s purpose is to run in the background and update the A records of some domain, based on the current IP address of some network interface.

However, these bytes, as they are, are not operable (or at least not in any functional, efficient way). What I really need is a data structure that can be traversed to get the highlights. This data structure is called an Abstract Syntax Tree (AST). The thing about ASTs is that they are supposed to be lightweight and efficient for traversing. No frills, no superfluous details, just the bare necessities.

Notice that the AST only stores the key information: user name, group name, interface name, URL, etc. It has no need for comments, line numbers, keywords (like interface), or whitespace.

Notice anything else? How about those arrays whose size is omitted! Those, my friend, are called Flexible Array Members, a clever feature of C99. They are conceptually simpler and more cache-friendly than Linked Lists. And they work exactly like you imagine: when I allocate the memory for one of those structs, I also include enough memory for N array members. The size_t member (such as domain_len or iface_len) is assigned the value N, so I know the upper bound of the array.

If that was too wordy, take a look at this UML-class diagram / memory-structure layout image:

Okay–enough with the CS. Let’s take another look at that simple example. Let’s see how dyndnsd would convert it into an AST. 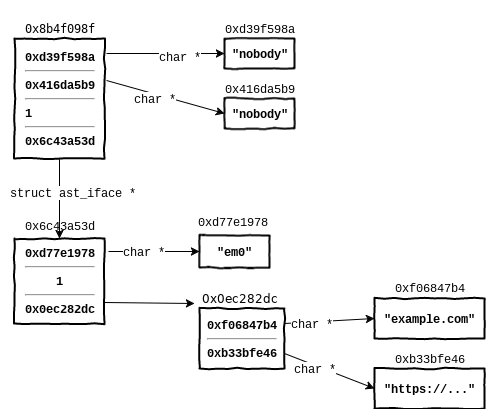 If you look closely, you’ll see this symmetry throughout the configuration and AST. However, sometimes, there are deviations; there is some asymmetry, “shortcuts” if you will, that I’ve enabled, in which the configuration won’t match the AST one-for-one. This is where the “Abstract” part of “Abstract Syntax Tree” comes into play. Look at the configuration below to see what I mean:

With this configuration, you might expect to find a char * pointer to "https://..." somewhere in the struct ast_root structure. But you won’t. Instead, this URL is “propogated” or “distributed” to the applicable domain, example.com. Instead, the URL will be pointed from within the applicable struct ast_domain structure. This allows the AST to maintain a consistent structure, regardless of where the configuration’s update statement may lie. The benefit is that the system administrator gains some flexibility in the configuration, and dyndnsd will still have a consistent, efficient traversal path through the AST.

I’ve gone over the output of parsing the configuration file, but I skipped over a big part: the actual parsing. Part of the parsing phase includes this structure called the Concrete Syntax Tree (CST). My next post will cover the CST in much more detail, but, for now, I’ll just leave you with a little teaser: if the AST is like Greymon or Charizard, then the CST is like Agumon or Charmander.